Inside the Design Idea – Everyone Intimate Alone Visibly

When Ben Levy, Artistic Director and choreographer for LEVYdance, contacted me about lighting his most recent full evening piece I was excited. We have worked together before and not only do I enjoy his choreography but I enjoy him as well. We have a good working relationship and appreciate each other’s aesthetic approaches. When we sat down to discuss the piece and he told me the general concept my initial reaction was that this was unlightable.

To many “unlightable” would be a place to stop, turn around, and go home. For me I saw it as an opportunity to look for new ways of approaching dance lighting. Why was the piece unlightable? Let’s look at the layout a bit. The work takes place inside a 30′x30′ square space bounded by 10′ tall screens which hang 4′ above the ground. On these screens are projections. The audience sits on all four sides in two rows thus creating a 20′x20′ dance space. On the floor of this dance space is more projection.

Because there are four walls traditional low angled side lighting was out. Because of the projections there could be no light on the floor or walls (light washes out the projection). Because the audience was so close and we could not have light in their eyes there was no high side/front/back light available. The only thing left were downlight pools but that would not have worked aesthetically for the piece. What to do?

As we talked more about the piece it became obvious that A) the projections were not on all the surfaces at all times, B) there were times when the projections could be, at least partially, washed out by the lighting, and C) we could light into the audience’s eyes on occasion when used judiciously. In addition to all that the walls do not make true corners but have 4′ openings where the “corner” would be. Lastly, because of the immediate proximity of the audience very little light could go a long way towards illuminating the performers.

One of the ideas with the piece (reflected in the video) is that the dancers are, at least initially, controlled by the space or there is a direct dialog between performer and venue. It opens as a kind of video installation with audience mingling about looking at images on the four screens. At some point the video fades out while our dancers get in place. Once in place a new reactive video begins which illuminates any movement in the dance space. Since this is not your typical dance show I knew that attempting to force “dance lighting” into this space would fail. I had to approach the space on its own terms.

This freed things up a bit and led me to look formally at the space as an object in which action occurs. I saw the open corners as alleys through which light could move. I saw the screens as walls off of which I could bounce light to illuminate our performers. Taking that idea one step further I chose to add bounce cards in the air which I would light to give a soft glow to the space. That idea of bounce light caused me to think of juxtaposing hard and soft sources in addition to varying the lighting by direct and indirect sources.

The light plot is a formally organized system of lights that creates an ordered geometry in the space. By giving myself control over each of the lights I could turn on all of a given system to create that formal geometry or only part of a system to throw the formality off balance as dictated by the needs of the choreography.

The video images are low-res black and white with one notable exception. As such I chose to follow the lead of the projections and keep the lighting in that same color world of gray tones. The video, music, and choreography run the gamut of soft and tender to harsh and severe. I wanted the quality of light to follow that same range and looked for a variety of options through which to achieve that.

The systems I used were as follows:

The Fluorescents make “corners” at the corners of the dance space. Booms are placed in each corner outside the screens with two lights each; a head high (for an alley shot across the space) and a low unit (for the overhead bounce cards). Three Source-4s and a Fresnel hang just above each screen; the Fresnels are for the screen bounce while the Source-4′s make up the high cross system (individually controlled and sharp edged to make boxes that the dancers can move in and out of). The downlights are a 3×3 grid of Fresnels. The downlight specials are for a special moment at the end and are hard edged Source-4s.

Here is a look at the light plot: 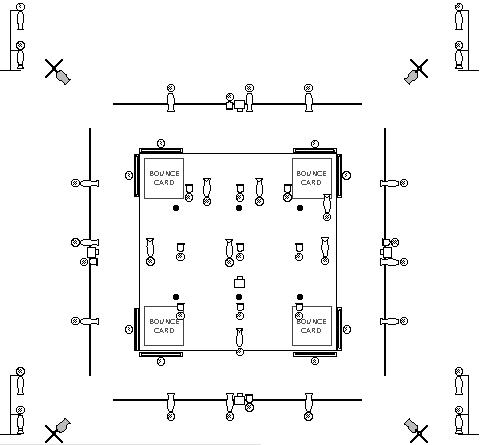 This show has a very controlled color palette ranging from 4300° K – 5700° K. Despite such a tight range of color the quality of light varies radically from sharp edged focusable lights to diffuse flood lights to indirect bounce light. Most lighting for live performance uses color and angle as the main story telling devices. In this case I was largely limited to variations on top light and had to look to the quality of light for variation. It is a sensibility common in television and film but rarely encountered in live performance.

The show tours to DC and New York before playing in San Francisco. On the road this design will be modified slightly at each venue as the equipment will vary. While some venues will not allow for the precision of hard eged vs. soft edged I should be able to maintain the direct and indirect sources with full integrity.

What did you think of this post? Let me know in comments.