Building upon ideas from our discussions of Hue and Saturation and Chroma we will now explore a phenomenon called Missing Color Syndrome. If you did not read the first two essays I would encourage you to do so as they provide foundational concepts which will be necessary to understand for this post to be of any real use.

Before I begin, I want to preface this essay by saying that this concept and the effects we are discussing here are some of the most difficult to understand through words. Writing about lighting color theory at all is a bit of a losing battle, but Missing Color Syndrome in particular only lands when you directly observe the problem, and the solution. I would encourage you to test these ideas and play around with different color combinations to see the different instances of these effects.

And now, on with the show.

Missing Color Syndrome is the name of the phenomenon that occurs when two lights with more saturated color media play against a less saturated or Clear light. The less saturated light takes on the quality of the shadow color of the more dominant light(s). The result is a light that does not look the way the designer intended it to. While this might be a problem for the unprepared, when we analyze the problem clearly, or even ahead of time, with the proper tools, we can bring greater awareness and precision to our color palettes for every show we light.

How does Missing Color Syndrome arise?

The human eye (or more accurately the human brain) has a propensity to create patterns. Add to that the evolution of the human eye to see what we know as the “visible spectrum” of light and you end up with a piece of technology that tries to see White light (or at least all three primary colors) in its field of vision at all times. Should we compose a look with only two of those colors, the eye will do its best to turn the least saturated light into that missing third color. If you use only Red and Blue, for example, the eye will desperately search for Green and will take liberties to turn non-Green colors Green if it has to.

Let’s return to our Woman-in-a-Red-Dress, once again, to see where this problem might arise. Perhaps our earlier choice of a G250 Frontlight was not the best. It toned her skin a too rosy pink and the director was interested in very natural skin tones for her actors. Further, the costume designer felt that while the color popped, his patterns and textures were lost. For our own reasons we decide against a true Red and choose a sympathetic color, Magenta. We put our L126 in a Backlight special and turn it on. It looks fantastic. Now to light her face. Excited by the Magenta we turn on our Frontlight and it looks a little Green. So we turn it up brighter. Still Green. By the time we have cranked it up to Full we do not notice the Green, but that fantastic Magenta halo effect is gone and she no longer looks like the stunning ingenue but rather like some too bright mannequin from a poorly lit department store.

This could be a disaster, but with our new found color tools, it is a solvable problem. 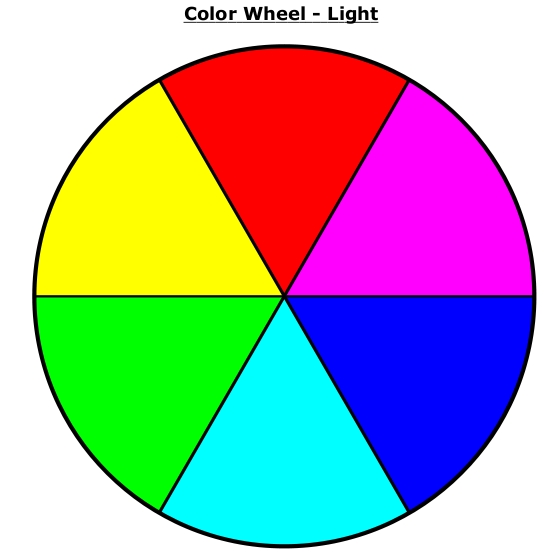 Returning to our Color Wheel we see that Magenta and Green are opposite one another. As we learned in our discussion of Hue, a shadow will take on the opposite color of its light. Because of this, when we put Magenta color media in front of one of the lights it makes the other light appear Green. This is not physics but physiology. How the human eye perceives something is wholly dependent upon the context.

To put it simply, everything is relative.

Now, one solution would be to put a Magenta color filter in our Frontlight. However, we already discussed the problems with heavily saturated Frontlight color and know that is not a viable solution. Returning to our discussion of Saturation we see that there are myriad options available to us to solve this problem without saturated colors. A Tint of Magenta is commonly known as Lavender. Further, Red is a sympathetic color to Magenta (and the same Hue as the dress). So in addition to a whole range of Lavenders we have many Pinks to choose from as well. We could use a warm Blue but it would need to be selected very carefully to avoid killing (or significantly altering) the dress color.

By using R53 (a very pale Lavender) instead of Clear we can have a huge impact. The Lavender, when set against the L126, will appear as White light. Because of the Lavender our eye is unable to make up the missing color and resigns itself to White. Our shadow color goes away and our look is preserved.

Missing Color Syndrome is most egregious in very colorful shows but can certainly arise in more monochromatic situations. The above case of Missing Color Syndrome is overt. A more subtle version of this phenomenon can be far more deadly. That is when we are working in a palette of Tints. Often it is not readily apparent what the trouble is because nothing is saturated enough to clearly see the missing color. All we know is that something doesn’t look right.

Missing Color Syndrome is often not caused by a single dominant color. Let’s say we have Pink and Blue Booms coming from either side. When we turn on our Clear Frontlight to fill out the figure we notice it taking on a Green tinge. This is due to the Pink and Blue acting in concert to create the shadow color of Magenta (the color Pink and Blue would make if mixed together).

Depending on the saturation of our first two colors the problem will need to be solved with varying saturations of our third color. If our Booms are L201 and G105 we may only need a very slight boost, perhaps an R53 or G109. If our colors are more saturated, like an R68 and L106, then we will need a much more saturated Tint to overcome the eye’s perception of the Clear light as Green.

We can turn this information around and use it to create striking color combinations in our palettes. Tom Skelton’s repertory colors for ABT use these very ideas to their advantage. There, the Backlight color is R70 and the Frontlight is R51. The Green Backlight contrasts strongly with the Lavender Frontlight (they are complementary colors). The effect is to push the Lavender (and the Blues as well) into a warmer and more inviting tone. Perfect for Ballet.

Understanding Missing Color Syndrome and how to cure it is one of the first practical applications of lighting Color Theory. If you missed my post on Hue or Saturation and Chroma I would encourage you to go back and read them through. In later posts I will be exploring Dominant and Recessive Colors, Color Correction, Gray, The Effect of Lamp Type, and Additive vs. Subtractive color mixing.

I hope you found this useful. Please take any new ideas and start experimenting. We will continue to build on these concepts throughout this series. Stay tuned.