An Adventure in Non-Standard Roof and Doors in Vectorworks

I am in the midst of an interesting drafting project. A two story house built from 24′ shipping containers. The house is partly built. The containers are on stilts with several windows and doors cut out in various places. I am drafting the structure, as built, in 3D in order to begin work on the final design phase of finishing the interiors, designing roof decking, and other aspects to make this industrial structure into a functional live/work space. Last week I covered the walls and this week we will look at the roof and doors.

The roof presented an interesting challenge. While not corrugated like the walls, it does have quite a texture to it. 30 ovaloid ribs on the top give it a raised exterior and a raised interior. My intent with this drawing is to model every component accurately with regards to its real world geometry. This gives the benefit, over using texture based modeling, of having the interior design/remodel be as true to life in the model as possible.

The roof of a 24′ shipping container Rendered in Vectorworks 2011

Creating the roof geometry turned out to be a simple process once I wrapped my head around it. My first instinct was to make a rectangle 1/4″ thick and then 30 flat ovals 1″ thick and use the add surface tool. The problem with this, as was the issue with using wall recesses for the walls, is that it would leave the interior of the roofing flat when in reality the ribs create recessed areas inside.

The next solution proved to be the best one. I created the rectangle, as mentioned above, and then cut out holes the size of the base of the ribs. I then created 30 NURBS curves, the shape of the top of the ribs, 1″ above the rectangle. From there I used the loft tool to connect the now cut rectangle to the various NURBS. I now had the interior and exterior geometry modeled to give full texture. This way, should the ceiling be exposed in this, or a future remodel, the geometry and texture is built in to the piece and will not have to be redrawn.

The doors were complex in a different way than either the roof or the walls. While none of the elements were overly complicated on their own, there are simply a lot of them. The door itself is a double hung 4″ wide metal frame with corrugated metal panels inside the frame. Simple enough. The complexity came from the locking mechanism. 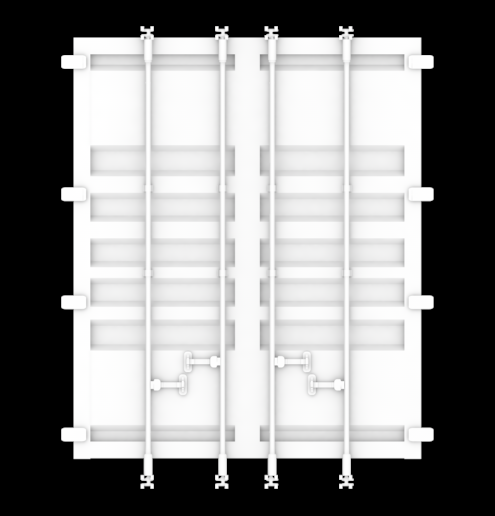 The doors of a 24′ shipping container Rendered in Vectorworks 2011

The locks are composed of two metal poles on each door with handles to rotate them. As they rotate, the hands on the top and bottom grab on and lock into the hands on the container frame itself. All of this was simple geometry, but again there were a lot of parts. Each handle was composed of several polygons, and the locking hands themselves were quite complicated shapes.

In addition to modeling all these interesting shapes, I had to make decisions about the degree of detail I was willing to go into. I wanted the locking mechanism themselves because that provides interesting possibilities when we get to determining paint colors on the exterior and choosing contrasting or complimentary colors for the locking system. But then there was the question of including hex bolts and other parts of the structure.

I made the decision, for now, to forgo that next level of detail. It will not impact design decisions or renderings. Should they prove to be useful later on I made the doors as symbols so it will simply be a matter of adjusting the symbol geometry in that one instance and the whole drawing gets updated.

One design idea is to remove one or more of the doors and replace it with a large glass wall. A quick replace symbol function will be a lot simpler if and when we reach that point in the process.

Now that the drafting is complete, I look forward to the design phase.